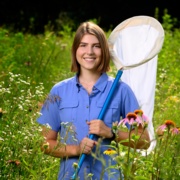 Ally Brown is a senior majoring in environmental biology–zoology from Grand Rapids, Mich., and a College of Natural Science Dean’s Research Scholar.

I have always loved the diversity of ecosystems and the organisms that inhabit them, from the re-creations my mother would take me to in zoos and gardens to the more natural expanses of northern hardwoods found across Michigan.

For the longest time, I thought that the health of ecosystems was a given, something to be enjoyed that all humans cared about and respected. The older I got, however, the more I realized that many natural areas are heavily fragmented and degraded, and that some people work specifically to help these areas recover in a field known as ecological restoration. This discovery led me to pursue a major in environmental biology, and when I got to Michigan State and learned that there was a researcher who studied fragmentation and restoration, I knew that I wanted to work with him.

My second summer as an undergraduate researcher in Nick Haddad’s lab at MSU’s Kellogg Biological Station (KBS) came with a host of new experiences, both exciting and challenging. For several months, I cared for 1000 Rudbeckia plants in order to study the impact of prairie strips – a new method of restoration that can be used to integrate natural spaces into human agricultural landscapes – on pollination in agricultural fields.

The expectation was that I would grow these plants to maturity and bring 500 or so of them out to the field when they began flowering in late June or early July. As tends to happen with research, however, this plan did not exactly go as expected.

The first setback we experienced occurred in mid-May, when the artificially ideal environment of the greenhouse caused the flowers to bloom over a month early. This was a crucial setback as the plants outside in the prairie strips had yet to come up. Although this was alarming at first, we managed to solve this problem by doing two smaller rounds of sampling rather than one big round. This ended up helping our experiment in the end, as the first round served as a way for us to test our methods and improve them for the next sampling round.

Another setback we experienced happened when the pollinated plants were moved back into the greenhouse to set seed. With so many large plants packed into such little space, they quickly became infected with powdery mildew and aphids. It was crucial to control these infestations, as they could potentially cause the seeds to stop developing which would prevent us from getting any results.

Luckily, KBS is home to a variety of researchers with diverse backgrounds, and by collaborating with members of other labs we were able to determine the correct pesticides to apply and ways to prevent future infestations.

Taking the lead on an experiment was something that I was concerned about at the beginning of last summer, especially as someone who worries about perfectionism. Although we encountered several difficult situations over the course of the summer, through collaboration and creative thinking we were able to come up with solutions that improved the experiment and will inform future iterations of the study. I am grateful for the experiences I gained in my second year of research at KBS, and I am now more confident in my ability to adapt and problem solve.