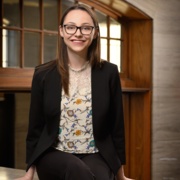 Amanda Ziminski , from Manistique, Mich., is a senior majoring in human biology. Ziminski, a first-generation college student,  is a College of Natural Science (NatSci) Dean’s Research Scholar and a Charles Drew Science Scholar .

Growing up as a first-generation college student, I knew that I wanted to be a physician, but I did not know how I was going to get there. I began touring many universities and I quickly found that no other place felt as welcoming and like home as Michigan State University.

While attending MSU, I was able to join the Charles Drew Science Scholars (Drew) program, which encouraged me to get involved in research. I was very apprehensive about, research and I didn’t think it was something I’d like. I lacked confidence in myself as a scholar and doubted my research capabilities. However, with a little encouragement, I found a lab and project that excited me; the Simply Dinner study. This lab allowed me to view life and medicine from an entirely different lens than I could possibly receive through my classes.

In the Simply Dinner study, we evaluate the correlation between childhood health outcomes and the interactions among family members during mealtime. This unique look into human development allowed me to gain a better understanding of how children interact with and perceive the world they live in. I was opened to the diversity a single daily task holds and how social interactions can significantly affect physical health. The understanding of how social environments contribute to the overall wellbeing of individuals is crucial for a physician.

As my last semester as an undergraduate student is coming to a close and medical school is quickly approaching, I’ve been reflecting on my time spent at MSU.

As a high school student from a rural area, a career in scientific research wasn’t something that was that I had considered. The idea that I would be working in a U.S. government-funded laboratory was something I never thought I’d be doing. Had I not been a part of the Drew program and encouraged to become involved in research, I would have never become a successful NatSci Dean’s Research Scholar.

With this realization, I decided to create the Girls in Science Program for rural middle school girls. The goal of this program is to encourage and empower the next generation of female scientists. This is accomplished by showing them that science is something they can do, and it is fun! My hope with the continuation of this program is to inspire other students such as me to dream big, and to realize that, they too, can become influential scholars and researchers.

My time spent researching has allowed me to step out of my comfort zone. With this experience I began to reach higher, seeking out new opportunities. This included becoming a NatSci Science Dean’s Research Scholar.

Being a Dean’s Research Scholar has not only been an honor, but a pivotal moment in my academic career. It has allowed me to refine my public speaking skills as I made connections with Spartans from around the country.

Although doing research may not be the focus of my career moving forward as a rural primary care physician, the lessons I have learned from my time as a researcher and representing MSU as a NatSci Dean’s Research Scholar are something that I will carry with me always