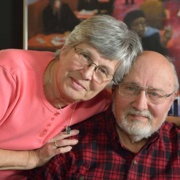 “MSU has ‘been my lifeline’ several times, just when I needed it,” she said. Conversely, Schoepke has been there for MSU when the university needed her.

After earning two MSU degrees and spending 11 years working in several MSU departments and programs, Schoepke and her husband recently decided to give back to the university to support a program that is near and dear to her heart—the Biomedical Laboratory Diagnostics (BLD) Program.

Schoepke and Michigan State have shared a truly symbiotic relationship.

The relationship began when she was one of a handful of Grand Haven High School students selected to visit campus, courtesy of one of the town’s civic groups. In fall 1956, her first MSU lifeline was acceptance in the pre-veterinary program and a job in the Veterinary Diagnostic Microbiology Laboratory. She later transferred to the Medical Technology (MT) Program in the College of Veterinary Medicine (CVM).

While working on her degree, Schoepke would get married, begin raising two children and move to Grand Rapids—where she completed her required internship at St. Mary’s Hospital and earned her bachelor’s degree. She then worked at the hospital for another two years.

“But soon, I felt a ‘dire need’ to return to MSU,” Schoepke said.

In 1965, she began working in the Department of Animal Husbandry’s Nutrition Laboratory (now Animal Science), where she was hired because of her MT degree. Yet another lifeline.

Over the next five years, she would divorce, and then meet and marry her current husband, John (B.S., marketing, ‘65), who also worked in the department.

Desiring an advanced degree, Schoepke began the master’s program in Clinical Laboratory Sciences (CLS) in 1970 and worked in the lab of John (Jack) F. Holland.

Barbara Barnes, a quality control supervisor at the University of Michigan blood bank laboratory, along with the Michigan Association of Blood Banks, helped launch the workshop series.

“Barbara really helped kick off my job at MDPH,” Schoepke said. “We did things that really made a difference; people learned new techniques and were able to apply them in their hospital laboratories.

“The program was successful due to the generous, voluntary contribution of several MSU faculty members, including Kathy Doig, a previous student of mine and past BLD director; and John Gerlach, current BLD director,” she added.

After 13 years with the MDPH, Schoekpe decided to retire, primarily to work from home with her husband on a business he had started in 1985 to manufacture and sell zippered storage bags for cars and motorcycles.

“But something about retirement wasn’t satisfying for me,” Schoepke said. “I was really yearning for structure, and for contact with those whose ‘language’ I understood.”

She contacted Gerlach for another MSU lifeline. He hired her to assist in the program’s beginning laboratory classes for three semesters.

Last April, Schoepke received notice that her good friend Barbara Barnes had passed away. She was stunned to learn that Barnes had left a TIAA/CREF retirement fund in her name.

It didn’t take long for Betty and her husband to decide what to do with the money; they would donate most of the fund to the BLD Program, with an emphasis on developing a doctorate in clinical laboratory sciences.

“I feel very sentimental about this gift and my affiliation with every director of the BLD Program,” she said. “I really owe my successes to those at MSU.”