Brendyn Smith: Becoming the artist I never was through organic chemistry 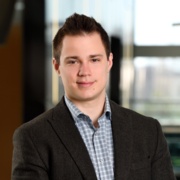 Brendyn Smith, from Dexter, Mich., is a senior majoring in biochemistry and molecular biology. He is a College of Natural Science Deans Research Scholar.

I vividly remember sitting in art class as an elementary school student frustrated. The vision of the art I wanted to portray was clear in my mind but, for some reason, I could not express the idea that I had onto paper.

It wasn’t until I discovered the intellectual freedom and creativity associated with scientific research, I had no other way to express my creative ideas. Once I began undergraduate research in the chemistry department at Michigan State University, I knew I had finally found a creative outlet—I realized that research was now a way for me to “get my idea onto paper.”

Before beginning my college education at MSU, I played hockey at elite levels and competed in tournaments across North America until I was 19. After high school, I even moved to British Columbia to play Junior ‘A’ hockey to pursue an NCAA Division I scholarship. Although I thoroughly enjoyed this experience, I eventually decided that I wanted to abandon my journey as a hockey player and give my undivided attention to academics. It was then that I became fascinated with how the health supplements that helped me recover after a game and play better worked.

What I eventually discovered is that these intriguing biologically active compounds had to have been made by someone or something. This led me to the realization that, more often than not, these molecules were originally created by nature. What fascinated me even more was the sheer functional complexity of these compounds; each bond, atom and configuration provide the molecule with unique electronic character and three-dimensional structure. Similar to the way a key fits a distinctive lock, each chemical designed by nature has its own unique function.

After becoming more and more familiar with organic chemistry research, I discovered that there is an entire field of study—synthetic organic chemistry—that is devoted to creating the chemicals that nature has conveniently synthesized. These compounds from nature are called “natural products,” and they vary greatly in size, complexity and three-dimensional architecture.

When one embarks on the journey of organic synthesis, it becomes obvious that the molecule of synthetic interest is like a piece of art. As a thought exercise, imagine gathering the best painters and artists in the world and asking them to draw a depiction of The Cliffs of Moher. As an analogical comparison, pretend these painters are chemists and that The Cliffs of Moher is a natural product. Each artist would recreate the cliffs in their own way. They would use different strokes, colors, tools and methods to portray their version of the scene, yet their pictures depict the same thing. This is analogous to the way a chemist approaches the synthesis of a natural product.

Without a doubt, my research experience in organic chemistry thus far has given me the ability to start becoming the artist that I never was in a field that I have an aptitude for. It's acted as a creative outlet for me to be an "intellectual artist"—an artist who requires no paint or pencils, just a vision and an ambition to think differently.

To quote one of my career idols, Dr. Phil Baran at the Scripps Research Institute, "the area of organic chemistry is such a beautiful one because one can be both an artist and an explorer. . . you can paint and visit the moon, but you don't have to leave the laboratory to do so."

This sort of mindset is what I think it takes to be a great thinker and/or scientist. There are many people who share a passion, but the ones with a unique vision and strong initiative are the ones who ultimately make the difference and drive innovation forward.