Brent Strong: Fighting off the disenchantment 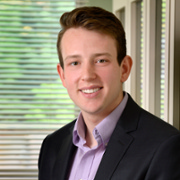 Brent Strong, is a senior majoring in physiology and is a College of Natural Science Dean’s Research Scholar . Strong, who is also an Honors College student, hails from Saline, Mich., but graduated high school from the Pan American School of Bahia in Salvador, Brazil.

Disenchantment is a slow drip. In the midst of the pandemic, it’s crept up on me bit by bit. The semester is a constant struggle to stay motivated, to muster a modicum of will to stare at the Zoom screen for another few hours.

Classes that once held great interest for me have been reduced to a daily chore, the flat screen of my laptop a poor imitation of the reality we all once occupied. Even worse is the constant drumbeat of bad news emanating from that very same screen. The death toll continues to rise. People lose their businesses and their livelihoods. Surveys conducted by organizations such as the Centers for Disease Control and Prevention point to a burgeoning mental health crisis, the effects of which will likely be felt for years to come.

But despite the seeming triviality of classes and other activities in the face of the ongoing disaster that is the COVID-19 pandemic, the things we are doing now are important.

Science has great capacity to change lives for the better. I was struck by this simple truth recently when I participated in a practice interview for the Marshall Scholarship.* When one member of the panel asked me why I had chosen to study stroke during my undergraduate years, I expounded at length on my intellectual interest in the subject, as if the disease was some sort of interesting puzzle to be worked out. After I finished my response, another member of the committee told me about his experience having a stroke and informed me that my answer lacked empathy for those who had experienced the devastating consequences of the disease.

Although COVID-19 weighs heavily in our minds now and the scientific advances in relation to vaccines and therapeutics have been hugely important, there are myriad other diseases and social conditions that kill and disable thousands every year. In a recent physiology class, I learned about heart failure, which affects up to 6.2 million Americans, and epilepsy, which afflicts another 3.4 million. Science offers the opportunity to help individuals with these diseases as well.

For me, the cure to my disenchantment has been to remember the importance of the science I am studying now and its potential to make someone’s life in the future just a little bit better.