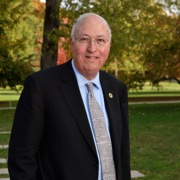 Just one day into retirement, Daniel (Dan) Van Haften found himself knee-deep in research at his local library on an unusual topic. He wanted to decode how an ancient Greek mathematical text had influenced Abraham Lincoln.

Four published books and 10 years later, what Van Haften undertook that day became a second career. Now, it is shaping an endowed professorship in deductive literacy at Michigan State University, which Van Haften recently established with a $1 million gift to MSU’s Department of Mathematics.

Van Haften, a 1970 alumnus with an undergraduate and a master’s degree in mathematics, hopes the position will help plant a seed for connecting mathematical logic with writing across the university.

It all began with a trip proposed by Van Haften’s lifelong friend and fellow MSU alumnus David Hirsch, a practicing attorney, who was to author a column for the American Bar Association Journal on Lincoln’s legal practice. Van Haften was fascinated, and decided to tag along on a research expedition to Springfield, Ill.

“We said ‘we ought to write a book on this,’” he recalled. “And we sat right down and outlined it on one page.”

Their first book—Abraham Lincoln and the Structure of Reason—was published in 2010. That  work outlines how Lincoln structured his persuasive speeches and letters using the same elements of deductive literacy that underlie mathematical proof and are attributed to the ancient Greek mathematician Euclid. Van Haften and Hirsch subsequently published three more titles and have others in the works.

“Mathematics is important to teaching people how to think logically,” Van Haften said.

“A faculty position devoted to deductive literacy will raise awareness throughout MSU and help influence logical thinking in many disciplines.”

Van Haften, who also holds a Ph.D. in electrical engineering from Stevens Institute of Technology, retired from Alcatel-Lucent in 2007. During his career at Bell Laboratories, AT&T, Lucent and Alcatel-Lucent, he worked on developing and testing large telecommunication systems.

The Van Haften Endowed Professorship honors Van Haften’s parents, the late James and Esther Van Haften, who set a lifelong example of support for learning. James was a 1945 MSU graduate in mechanical engineering. Esther was a school teacher.

The professorship will be awarded to an assistant professor with great potential for a promising career in the Department of Mathematics, with preference given to those working with instructional techniques in deductive reasoning in the undergraduate curriculum.

“This endowment will help us recruit a top-notch, up-and-coming mathematician who will attract other excellent faculty and bright students,” said Keith Promislow, MSU Department of Mathematics chair. “We have a strong ‘Transitions to Proof’ course that guides our undergraduate majors in their first steps of constructing proofs. The Van Haften professorship recipient would be an excellent candidate to build upon this course and to expand it to other majors who might have an interest in sharpening their ability to construct logically precise statements. We are profoundly thankful to Dan for advancing the impact of mathematics in such an important way.”