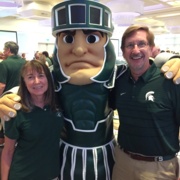 He developed the first antibody test for Legionnaires’ disease in 1977, established the first Virology Lab at Lansing’s Sparrow Hospital in 1979, and co-founded the American Proficiency Institute in 1991—the first U.S. organization to focus on physician office quality assurance.

Edson came to MSU from a high school class of 36 in the fall of 1969. He transferred to Central Michigan University in 1970 and received his B.S. degree in 1973 following a one-year internship at Munson Medical Center in Traverse City.

“After a few years of hospital work, I realized that I wanted to do more than just routine laboratory work,” Edson said. “The graduate program at Michigan State was attractive because it would allow me to focus on microbiology and infectious diseases.”

Upon returning to campus in 1977 Edson said that MSU felt like home. “I felt very supported by my advisor Kathy Doig,” he said. “So began my lifelong respect for the enthusiasm that Dr. Doig brought to laboratory science students, to her colleagues, and to clinical laboratorians nationwide.”

As an MSU graduate student, Edson developed the first blood test for Legionnaires’ Disease and helped investigators trace the cause to contaminated air conditioner cooling reservoirs at a Philadelphia hotel.

After earning his master’s degree from MSU in Clinical Laboratory Science in 1979, Edson was asked to set up a virus laboratory at Sparrow Hospital, where he had worked weekends during graduate school.

In 1980, he returned to Traverse City to take a position with a pathology group that operated proficiency testing programs for U.S. hospitals. When that group decided to move to Chicago in 1991, Edson and a colleague devised a novel way to assess the accuracy of laboratory tests performed in physician office laboratories and formed the American Proficiency Institute (API).

During the 1990s Edson reconnected with MSU, returning to campus to give talks to undergraduate and graduate students.

“We got to a point where Debbie and I had the financial capacity to give back,” he said.

Subsequently, they have made generous donations to the medical school, various athletics programs and, of course, BLD; the Edsons’ latest gift is a minimum $1 million future gift to establish a BLD endowed professorship.

“This professorship is a way for us to say thank you to Michigan State; I also see it as a tribute to Kathy Doig, and other BLD faculty—such as Martha Thomas, Doug Estry, and John Gerlach,” Edson said.  “We hope this endowed professorship will lead to future gifted educators who will, in turn, inspire other clinical laboratory scientists to pursue their dreams and understand the value of believing in themselves.

“I think we all need to step back and look at the role that Michigan State played in our lives during those formative years,” Edson said. “Now we have an opportunity to help coming generations in that same way. It’s vital to the long-term success of the university.”