Gerard and Margaret Crawley: An energizing climate at MSU 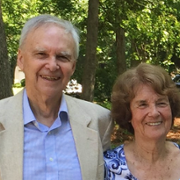 When Gerard (Gary) Crawley came to MSU in 1968—for the second time—he noticed that the human environment hadn’t changed. He found the same great spirit of camaraderie and support that he experienced when he first came to MSU for a postdoc position in the Cyclotron—now known as the National Superconducting Cyclotron Lab (NSCL)—after completing his Ph.D. at Princeton University.

“I had met Henry Blosser, who was then the director of MSU’s Cyclotron lab, at the home of one of my Princeton professors,” Crawley recalled. “Henry spoke about the brand new and very high-quality Cyclotron at Michigan State and convinced me that this would be a good place to do a postdoc.

“I worked with many of the faculty on a variety of nuclear physics projects during that time,” said Crawley, who first came to MSU with his wife, Margaret, and their three children in 1965. “Ideas were floated around continually, and I think we all felt that even though we were a new laboratory with a new Cyclotron we were becoming one of the leading nuclear labs in the U.S.”

After his postdoc, he held a two-year position as a Queen Elizabeth II Fellow at the Australian National University in Canberra. Compared to MSU, he found the Canberra lab to be much more formal and far less collaborative.

“So when I was offered a position back at MSU, it was a fairly easy choice,” said Crawley, who returned to MSU in 1968 as an assistant professor in the physics and astronomy department.

After leaving MSU in 1998, Crawley held the position of dean of the College of Science and Mathematics at the University of South Carolina and then spent three years overseas at the Science Foundation Ireland (SFI) as head of the Frontiers Directorate.

After his retirement from SFI in 2007, Crawley still had a lot of energy of his own to expend. Working with World Scientific Press (WSP), he edited The Handbook of Energy, and a series titled “Critical Energy Issues.” He has also contracted with WSP to produce a three-book set about the climate crisis

“Climate change is a significant threat for the future, and MSU has the capability to address it in many ways, including the reduction of fossil fuel use by helping to develop improved and safer use of nuclear energy,” said Crawley who, along with his wife, recently established the Gerard and Margaret Crawley Family Fund, which gives an MSU graduate student in nuclear physics the opportunity to spend time at an institution—in the United States or abroad—specializing in the development of nuclear energy, in order to evaluate a possible career path in that field.

“We hope that some of the talented nuclear physics graduate students at the NSCL will work toward solving the issues of cost, safety and storage connected to nuclear energy,” he said.