Han Setiawan: A passion for research 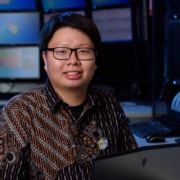 Hananiel Setiawan, from Surabaya, East Java Province, Indonesia, received his B.S. degree in spring 2017. He majored in physics and was also a College of Natural Science Deans Research Scholar.

“Why do you like physics?” “What, exactly, is your research?” Those are the two questions I get asked most often by my friends and relatives.

You see, I am a first-generation college student. The concept of having a career in “science research” was foreign to my family and to me; the kind of science I was exposed to throughout grade school was facts and figures, with some occasional well-defined laboratory experiments. I did not know what research really meant either, and if you had asked me 10 years ago about what I wanted to do when I grow up, I would probably echo back some vague answers like “I want to be a doctor!” or “I like planes, I’ll go to pilot school.”

My education endeavor became drastically different when my family and I immigrated to the United States. Though my preparation coming here was rather lacking, I have been blessed with so many opportunities that I could not easily attain back home. As I was finishing my last high school year at Lansing Community College, an opportunity to intern at MSU’s National Superconducting Cyclotron Laboratory (NSCL) opened up (thanks to Drs. David and Rebecca Shane) and since 2013, I have been a part of Professor Betty Tsang’s nuclear physics group there.

I have been very fortunate to be involved in cutting-edge nuclear physics research at MSU’s NSCL. Being able to interact with leading physicists and learn from them is one advantage I would not get in most other physics programs. As a result of my undergraduate research participation, I have learned many research skills, from programming to engineering, and expanded my professional network with scientists locally and internationally, through collaborations.

My education at MSU has also led me to countless other opportunities, including two unforgettable summer research experiences at Northwestern University and SLAC National Accelerator Laboratory at Stanford University. And I completed my senior research project at the University of Zurich during my last semester.

As I reflect on all my experiences in the past three years: the good, the bad, and everything else in between, I realized that I am passionate about research and I want to continue being involved in it. After all, what’s better than being able to fulfill my curiosity and my own “why” or “how” questions?

Regardless of which school or which company I will be a part of after my graduation, MSU has prepared me very well for my future study and career; I am one proud alumnus of Michigan State University and the College of Natural Sciences.