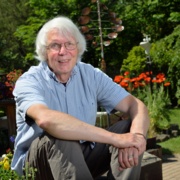 Before he even began graduate school, John Ohlrogge’s career goal was firmly planted—he wanted to conduct research that would not only advance knowledge but would benefit society.

Initially heading down a career path in medical research, Ohlrogge, Michigan State University Distinguished Professor Emeritus of plant biology, shifted his focus while working on his doctoral degree in biochemistry.

“I realized that medical research fields are overcrowded with people competing on similar projects,” Ohlrogge said. “I knew there was less research being done on plants, and that a lot of important discoveries could be made in plants because there was a lot less known. That attracted me.”

After completing his postdoctoral work in plant biochemistry at the University of California, Davis, Ohlrogge worked for the USDA for six years prior to joining the MSU in 1987.

Over the next 30 years, Ohlrogge’s career would focus on understanding the biosynthesis of seed oils, a major source of food and a feedstock for many industrial products—including biofuels.

Oils are the most valuable component of most seeds, and discovering how to modify or increase oil production in plants is very attractive commercially, according to Ohlrogge.

In addition to his well-respected work in the lab, Ohlrogge was also responsible for recruiting to MSU a number of top scientists who have become leaders at MSU and in their fields—including Christoph Benning, Dean DellaPenna, Yair Shachar-Hill and Andreas Weber.

Ohlrogge noted that collaborating with his colleagues at MSU and as a member of the Great Lakes Bioenergy Research Center  has had a profound impact on his work.

For example, Ohlrogge and Benning, director of the MSU-DOE Plant Research Laboratory, have collaborated on a number of projects over the past 15 years, including the first deep sequencing and analysis of gene expression in Arabidopsis seeds.

Ohlrogge’s lab also led the development of two website databases—ARALIP (http://aralip.plantbiology.msu.edu/) and PlantFAdb (https://plantfadb.org/ )that can be accessed worldwide. PlantFAdb brings together more than 75 years of published data on the fatty acid composition of seeds of more than 9,000 plants.

About 20 years ago, Ohlrogge and his wife, Carol, begin donating to MSU—specifically the plant biology department—on a regular basis.

“I think that if you’re lucky enough to get a job as a professor—to be able to do independent research and work with young scientists—you have, by far, one of the best jobs in the world,” Ohlrogge said. “I wanted to give back to the department that supported me by contributing some unrestricted funds that could support improvements in plant biology.”

“I am very proud that many of my former students and postdocs now have tenure-track faculty positions, and several of them remain friends and colleagues who collaborate in the plant lipid field,” he added.