John Woollam: Giving back to help others build careers 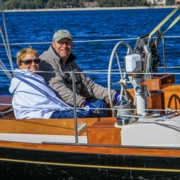 About 50 years ago, MSU Professor Peter A. Schroeder had a profound impact on a particular graduate student. Now, that graduate student wants to pay it forward to students who are following in his footsteps.

John Woollam, a George Holmes Distinguished Professor of Electrical Engineering at the University of Nebraska – Lincoln, established the Peter A. Schroeder Physics Fellowship Fund in 2012. He said it’s important to him to help students build their careers—through teaching, mentoring, advising—just as Schroeder did for him.

“Dr. Schroeder let us find our way, discover new things, feel the excitement. He never micromanaged; he simply gave guidance along the way,” Woollam said. “That management style followed me into my adult life. That is the basis for the principles of my teaching.”

A native of Kalamazoo, Mich., Woollam received a B.A. in liberal arts from Kenyon College in Ohio prior to coming to MSU, where he received his M.S. in 1963 in physics and his Ph.D. in 1967 in solid state physics.

Woollam’s first job was with the NASA Lewis Research Center in Ohio, where he worked for 13 years. While there, he took classes, one at a time, to earn his M.S. in electrical engineering from Case Western Reserve University in 1978. From there, he went directly to teach at Nebraska.

We wanted to honor Peter, to show our gratitude for his mentoring,” Woollam said. Schroeder passed away in February 2018.

Woollam is now in his 40th year of teaching at Nebraska, where many of his colleagues are MSU graduates. He teaches optics and their applications in spectroscopy and measurements, which is the basis for the company he founded in 1987—the J.A. Woollam Co.—a university spin-off that has emerged as a worldwide leader in the production of spectroscopic ellipsometry instrumentation. The company manufactures ellipsometers for a wide range of applications and, with distributorships in more than a dozen countries, has sold more than 2,500 ellipsometers worldwide. Woollam is named on 57 patents and his company has secured more than 200 patents to date. Most of the engineers he’s hired are his former students, or students of colleagues.

Again, he credits his successful business model to Schroeder.

“Peter mentored me and many other students. Now, we are mentoring others who, in turn, will go out and mentor future students,” Woollam said.