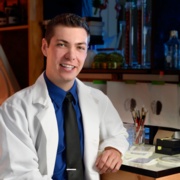 Kristian Wilks is a junior majoring in genomics, molecular genetics and neuroscience from St. Clair Shores, Mich., and a College of Natural Science Dean’s Research Scholar .

Since I was a kid, I knew that I wanted to obtain a college education. Growing up, my family constantly reminded me how important it was that I did so, and while at such a young age I did not fully grasp the concept of what college was, I knew that I loved learning.

However, as I grew older and the deadlines approached, deciding which institution to attend became somewhat exhausting. It seemed as if though every aspect of my future depended on where I went and what program I chose, and it worried me. I looked at many schools, but ultimately I knew I wanted to stay in Michigan so I could be close to family, and the in-state tuition did not hurt either.

At this point, I had pretty much decided on going to U of M and I was excited, as was my family. Still though, the idea of going to Michigan State was present in my mind and so I had some reservations about my decision.

Shortly after I had decided, the schools sent information including financial packages and opportunities that would be available to me attending each of their institutions. One thing I had really been hoping for was the ability to do research as, ever since I had learned of it as a career path, I became enamored by the idea of helping contribute to scientific knowledge. When I looked at what both universities had to offer, there was no doubt in my mind where I was going to attend. Michigan State gave me the opportunity to do research my freshman year—something U of M told me was going to be highly unlikely. I was also admitted automatically into the Honors College at Michigan State, something that, again, I was told would not likely be an option at U of M. Given these opportunities, coupled with the financial help that Michigan State offered that I had been denied elsewhere, I would have been a fool to choose to go anywhere else.

Now do not get me wrong, I greatly respect the University of Michigan; they are a great institution with a lot to offer. However, Michigan State offered me the opportunities I had dreamed of and then some.

Even when I got to campus, there was so much more I did not know existed that I could do, that it felt almost overwhelming. Any doubts that may have lingered in my mind about whether I made the right choice instantly vanished. Since I have been at MSU, I’ve met many amazing people and have been presented a multitude of opportunities that have seemed too good to be true, and that’s just how MSU is!

Comparing my experience to my friends who attended other universities, I can honestly say that I know MSU is among the best in caring for their undergrads and helping them to follow their dreams. No matter who you are, what you want or where you want to go, MSU has a way of helping you do just that.