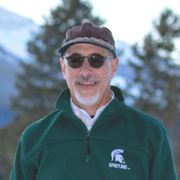 Kyle Lewallen was a pre-med student when he first came to MSU. But after enrolling in Geology 101— “just to fulfill an elective requirement”—he switched his major to geological sciences.

“As it turns out, the class was very interesting and was taught by one of the most dynamic professors in the department at the time—David Long,” said Lewallen, who worked for more than 30 years as a geophysicist in the oil and gas business until retiring last year.

“Although I have had plenty of years of education, I believe the fundamental geoscience principles learned during my undergraduate years at Michigan State set me up for career success,” said Lewallen, who was born into a Spartan family. A native of Niles, Mich., he and his family regularly spent time on the MSU campus—from attending football games, to visiting the museum, to enjoying picnics on the banks of the Red Cedar River.

He was hired in 1986 by His first job was with a large independent exploration and production company and was responsible for drilling two successful offshore Gulf of Mexico wells and numerous horizontal wells along the Gulf Coast region. In 1996, he was hired by Exxon (now ExxonMobil) in Houston.

“I worked nearly half my ExxonMobil career designing and acquiring seismic surveys for ExxonMobil’s worldwide affiliates,” he said. “The remainder of my career was spent researching new geophysical equipment and technologies to improve subsurface imaging as well as establishing innovation best practices.

“Michigan State did a great job teaching the basic sciences and the fundamental geoscience principles I’ve used throughout my graduate school training, as well as my business career,” Lewallen said.

Facilitating excellence in geoscience education is why he feels it’s important to give back to MSU, the College of Natural Science (NatSci) and the Department of Earth and Environmental Sciences (EES).

“Over the years, I have found meaningful ways to personally engage with the department,” he said. “I have written letters to MSU’s Board of Trustees, proclaiming my support for the value and necessity of geoscience education, especially as a land-grant university.”

He also contributes financially to the John T. Wilband Memorial Scholarship Fund in Geological Sciences (which supports geology field camp experiences), and currently serves on the NatSci Dean’s Board of Advisors.

“Now, more than ever, it’s important to engage with EES students at MSU. There are many ways to help, and I encourage you to explore options that are meaningful to you,” he added. The future of the Department of Earth and Environmental Sciences at MSU is bright.  Your personal engagement will make it even better.”