Marilyn and Bo Dimitroff: A great love for MSU 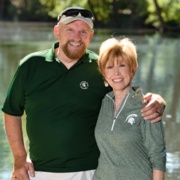 No matter how Marilyn Capelli Dimitroff (B.A., mathematics, ’66) is characterized, her leadership and intelligence have led her to success in almost everything she has attempted.

“Sometimes I have to pinch myself,” she said. “I couldn’t have foreseen the path my life took.”

A high school and college math teacher after graduating from MSU and earning a master’s degree in math from Eastern Michigan University, Dimitroff took time off to raise her children. When they started school, she wanted to go back to work, but couldn’t find any teaching jobs. A meeting with a woman stock broker piqued her interest and she became one of four woman brokers at a 200-plus person firm. She was then chosen as the person from her office to go through certified financial planner training.

“That was my ‘aha’ moment,” Dimitroff said. “The idea of learning about a client’s situation and coming up with integrated solutions to meet their needs -- I loved that holistic approach. It made so much sense to me.”

A certified financial planner professional since 1982, Dimitroff became a national leader in the financial planning profession. She was part of the group that helped write the profession’s practice standards and chaired the CFP Board of Standards in 2009. She started her first company in 1982 and combined her most recent venture with another company in 2013. Currently, she is a principal and director of wealth management for Planning Alternatives in Bloomfield Hills.

Marilyn’s husband, Bo (B.A., history, ’66) was a star center on the 1965 Big Ten and National Championship MSU football team and was named to the All-Big 10 second team. They never met during their time in East Lansing, though Marilyn, a huge football fan, did see him play. Both were divorced when friends introduced them in the early 1990s; the couple married in 1994.

Success also has followed Bo through a colorful career. After being a high school teacher and coach, he joined the business world, designing organizational development and leadership programs for firms around the world, including Burroughs Int’l Group, Phillips Lighting and Quicken Loans. Ultimately he launched his own consulting firm. But Bo’s personal dream was to be an author. So he began writing crime novels and was accepted into Elmore Leonard’s former writers’ group. Bo had completed two well-received novels so far.

“We both feel fortunate to have had success doing what we love,” Dimitroff said. “We also share a great love for MSU – and the approach the university takes, so giving back was natural.”

The Dimitroffs have created a named Spartan Scholarship Challenge endowment in the College of Natural Science, and also support the Honors College, the Mathematics Department, and the Spartan Fund.

“Creating the scholarship has been very rewarding,” Dimitroff said. “When we were in college, the cost was far less expensive relative to what families earned. We want kids who are interested in the sciences to have support.”