Megan Donahue and Mark Voit: Making a difference with science 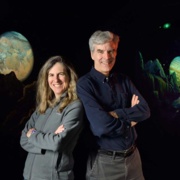 Megan Donahue and Mark Voit, professors of physics and astronomy who are both internationally known for their research on galaxy formation, went to two of the most prestigious undergraduate institutions in the country (Princeton and MIT, respectively). But the couple, who met in grad school at the University of Colorado 30 years ago in March, feel a much deeper kinship with MSU than any other school.

“Both my wife and I come from undergraduate institutions that have plenty of money,” said Voit. “They’re heavily endowed. We donate symbolically to them, but there are more opportunities to make a difference at MSU.”

“I am proud of MSU,” said Donahue. “There is a spirit to MSU that prevails, not just in the classroom, but in how the students are on the field and in the world. The programs at MSU are fortified by an ethic of working hard and achieving; there is no sense of entitlement. I am proud to be contributing to MSU. Here at MSU, hearts are in the right place.”

Voit and Donahue came to MSU in 2003 after being employed for 10 years at the Space Telescope Institute outside of Baltimore working on the Hubble Space Telescope Program. Steve Zepf, another MSU physics and astronomy professor, recruited the couple.

“I had always wanted to teach; I wanted that personal contact and there was no teaching in the Hubble Program,” Voit said. “MSU made it an easy choice by offering both of us faculty positions.”

The couple were textbook authors before they came to MSU and for the first five years after they arrived, they donated the royalties from the book and more back to MSU to help fund the SOAR telescope program. When the SOAR program was essentially complete, they then decided to focus their giving on Abrams Planetarium for the next five years.

“Now we’re going to endow something this year, we’re just not sure what yet,” Voit explained. “But it will probably have something to do with the teaching of astronomy to non-scientists. It’s something we both believe strongly in – general education doesn’t always get the same resource attention as some of the fancier areas of the university. Now that we’ve been here for a while, we’ve had ample opportunity to see what the needs are.

“Philanthropy on the scale we’ve been doing with MSU we haven’t done anywhere else,” he continued. “I’m surprised by how gratifying it is. You feel like you’re doing something.”

Both Donahue and Voit teach ISP 205 Visions of the Universe, which is a hugely popular astronomy course for non-science majors taught in large sections.

“We’d like to enrich that course somehow,” said Donahue. “Sometimes it feels like we’re teaching this huge section with very few resources. It could be because integrative studies doesn’t really have its own department or alumni, it falls a little lower on the priority list. There’s no group of graduates advocating for it. We’d like to throw a little love to that course.”

Both Voit and Donahue said they were more confident that their donations to MSU were going to areas that were really going to make a difference, which makes them feel more comfortable about giving more.

“We would like to make some difference to improve the education of non-science majors so that everyone comes out of MSU with a sound experience of what science is and isn’t, as well as better critical thinking skills and better equipped to deal with the unknown in the 21st century,” said Donahue. “One thing we know about science is that it helps us deal with the unknown. We don’t know everything today, but how do we obtain and verify our understanding of the physical world? Through science.