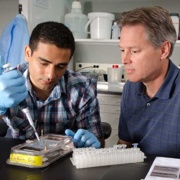 “My only request is that he doesn’t mention his religion in school,’ the principal told my mother. I was just starting first grade. I remember standing beside my mother at the time, and while I didn’t understand, I just did what I was told.”

Raeuf Roushangar, now an MSU biochemistry and molecular biology senior, recalls that moment to this day.

He was born in Oman—a small country on the Persian Gulf—to an Iranian father and an Egyptian mother. Unlike the majority of Egyptians and Iranians, he was of the Bahá’í faith.

When Roushangar was four years old, his father returned alone to his homeland of Iran due to a serious health condition, while Roushangar’s mother took him and his two brothers back to her homeland of Egypt.

“There, I endured hateful and discriminatory actions for nearly two decades due to Egypt’s intolerance of religions other than Islam and Christianity,” Roushangar said.

After his first year at Cairo University, he was suspended because of his faith.

“The only chance I had to continue my higher education was to come to the United States,” Roushangar said.

He arrived in Grand Rapids, Mich., in 2008. During the first six months, he was homeless.

Though he had relatives who lived in Grand Rapids, Roushangar said, “I’ve always been independent. I wanted to find my own way.”

At night, he walked the streets. During the day, he spent time at the library, which he described as a source of enlightenment; it provided a safe place to sleep, as well as a treasure trove of knowledge.

When asked how it felt to be homeless those first few months, Roushhangar responded: “I had never felt more free, welcomed and secure in my life.”

He eventually was hired as a tutor at Grand Rapids Community College.

“In my life, I always find people who believe in me,” he said.

After two years, he transferred to MSU and soon secured a position as an undergraduate research assistant in the lab of Brian Schutte, BMB adjunct faculty member and associate professor of microbiology and molecular genetics. He works alongside BMB graduate student Youssef Kousa, who is from Egypt.

“Youssef has played an important part in Raeuf’s life . . . bringing him into my lab, training him, working with him, mentoring him,” Schutte said. “Mentoring is really important; that’s a word we use a lot.”

Schutte’s research focuses on the gene that causes cleft lip (cheiloschisis) and cleft palate (palatoschisis), which are among the most common birth defects worldwide.

Roushangar said that one of his best experiences at MSU has been “the opportunity to be involved in research like this with a great expert in the field—Dr. Schutte—and being mentored by one of the best grad students—Youssef.”

Roushangar plans to attend medical school to help serve the underserved. His goal is to be a physician scientist, specializing in neurology.

The organization’s mission is to collect, catalog and ship unused medical supplies from the United States to poor communities around the world. In 2011, he traveled to Iran and was able to locate his father, whom he hadn’t seen since he was four years old. Roushangar currently keeps in touch via Skype with his mother and relatives in Egypt.

“The scars from my childhood experience remind me of how far I have come and how much further I can still go,” Roushangar said.

“What I went through growing up has made me who I am today. I learned from the negative side of my life to light candles in response to any darkness around me. Regardless of the size of the mountain one has to scale, I have learned to react with the power of love and well-being. I would just hope that no one else has to go through what I did.”