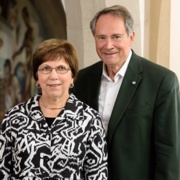 Forty-seven years after receiving his bachelor’s degree in mathematics from Michigan State University, Ron Simon found himself back in an MSU classroom. But this time, he was not enrolled in MTH 234, or MTH 320 or MTH 421. He registered for 152-Harry Potter and the Secrets of British English, 252-Straw and Tape, 504-Exploring the Forest Community, and 656-History of Sparty—alongside his 11-year-old grandson Alex.

The two attended this year’s Grandparents University, a program designed for alumni and grandchildren (ages 8-12) to come together for a three-day educational experience on the MSU campus.

The now-retired Auto-Owners Insurance Company CEO has always recognized the value of an MSU education. Now, he and his wife, Mary, are giving back to the university that started him down a highly successful career path.

Simon began his studies in mathematics at Michigan State in 1963, and also enrolled in all of the computer science courses that MSU offered at the time.

“Although math—and MSU—was challenging, it was one of the things I knew I was going to accomplish. My attitude is: Given a challenge, we can live up to it; we are going to achieve what challenges come to us,” Ron said.

He was married in summer 1966, between his junior and senior year at MSU. While Mary worked full time, Ron took a job at Auto-Owners—full-time that summer, and then part-time through his senior year. After Ron earned his degree in 1967, Auto-Owners offered him a full-time position in the programming area.

“I liked the people, and I liked the company, so I continued on,” he said.

Ron spent the first 23 years in the IT/computer science area at Auto-Owners.

He then moved to and led the actuarial science area, and also acquired all of the underwriting responsibility for the company. He served as treasurer, was named president in 2005 and became CEO of the company in 2008. He retired in 2010 after 44 years of service.

“We always felt we were blessed, so we wanted to give back,” Mary said. “We have a fondness for Michigan State, and Ron has had a great involvement with MSU’s Actuarial Science Program. We thought it was a good place to put some of our resources.”

“Actuarial science is key—and critical—to the insurance industry. When MSU developed the actuarial science emphasis, I felt that it was something I wanted to be involved in,” Ron said.

This year’s Simon Lecture, which takes place on November 7, will focus on the synergy of the business and academic communities.

In retirement, the Simons continue to contribute to the community through volunteer and philanthropic activities. Ron served on the College of Natural Science Dean’s Advisory Board, and currently serves on MSU’s Actuarial Science Advisory Board. He also chairs the Sparrow Foundation Board, and is involved with the Michigan Dyslexia Institute and Volunteers of America. Mary works with the Tri-County Office on Aging and delivers Meals on Wheels.

In June, alongside Alex, one of his five grandchildren, this already highly successful grandpa added perhaps the most important academic achievement to his resume—a diploma from MSU’s Grandparents University!