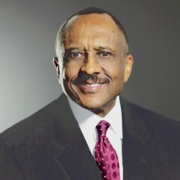 MSU alumnus Ronald Goldsberry considers himself fortunate—in more ways than one. His list of credentials is over-the-top impressive: he served two years as a U.S. Army captain, was named a member of the National Academy of Engineering, held several executive positions in Fortune 500 companies and was the only African American to serve as CEO of an American chemical company in the 1980s, among other accomplishments. Yet, he has not forgotten his humble roots—or his alma mater.

“I continue to give back to MSU because I want to allow others to have the same opportunities I had when I was a student.”

Goldsberry credits some of his success, in part, to Michigan State University. That’s why he has been giving back to help others.

“I was so fortunate,” Goldsberry said. “I had so many people helping me at MSU—the professors, the advisors, other African Americans on campus. There were times I didn’t think I’d make it, but their help and mentorship had a huge influence on me being able to obtain my Ph.D. at Michigan State.”

“What mostly attracted me to come to Michigan State was my dad, who was a medical doctor in the Detroit area. I guess I had this hidden desire to be in Michigan to be closer to him,” Goldsberry said.

“I really didn’t have much of a relationship with my dad until I got to Michigan.”

After receiving his M.S. (1966) and Ph.D. (1969) degrees in chemistry, Goldsberry taught chemistry at the University of California at San Jose and worked as a research chemist at NASA’s Ames Research Center before returning to school to receive his MBA from Stanford in 1973.

During his career, he held positions at Hewlett-Packard, Boston Consulting Company, Gulf Oil Corporation, Occidental Chemical Corporation (now known as Occidental Petroleum) and Parker Chemical Company.  When Parker was bought out by Ford Motor Company in 1983, Ford named Goldsberry president and chief operating officer of Parker. Goldsberry continued to move up in the company until retiring from Ford in 2000 as global vice president for customer services. He then was a consultant on automotive practices for Deloitte Consulting from 2001-2013 and is now an independent consultant.

Throughout his distinguished career, he has not forgotten about MSU.

“I continue to give back to MSU because I want to allow others to have the same opportunities I had when I was a student,” Goldsberry said.

He has a long history of supporting MSU in various ways. He was instrumental in helping to establish the James L. Dye Endowed Chair in Materials Chemistry; was a president’s cabinet volunteer for MSU’s previous capital campaign—Advancing Knowledge, Transforming Lives; served on the MSU Foundation board; was one of the founders of the MSU Black Alumni Association; established the Ronald E. Goldsberry Family MSU Black Alumni Natural Science Scholarship; and returned to campus to speak to students in the National Organization for the Professional Advancement of Black Chemists and Chemical Engineers.