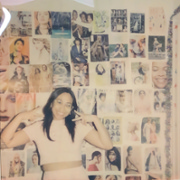 Teresa Panurach is a fifth-year astronomy PhD candidate within the College of Natural Science and studies accreting neutron stars in Galactic globular clusters.

My journey in this field is nothing short of being tumultuous and choppy. When I reflect on my past experiences, I often laugh and think about how I abruptly landed a career in astronomy despite the obstacles I have faced.

I have suffered with math anxiety ever since I could remember and was average in my science classes. I might not have ever considered astronomy as a career, but then I was placed in an elective course in high school where students were allowed to do open-ended scientific research projects. I chose to do my project on binary star systems because the first magazine I grabbed was a pop-sci astronomy magazine. I enjoyed learning about space, and my teacher suggested I study astronomy in college. I quickly dismissed that idea and said, “I don’t think I’m good enough for that.”

I never thought of astronomy again until I enrolled in community college where I took an Astro 101 course to fulfill a degree requirement. I remembered those happy feelings from high school and decided to move back to New York from San Diego to pursue my physics degree at a four-year minority serving institution (MSI) .

I honestly never felt stupider in my life than being at my undergraduate institution. My math anxiety riled up again and going to the introductory physics courses made me feel worse about myself. I also had to work full-time at my family’s restaurant and didn’t have time to study as I should have, so I always felt like I was playing catch-up.

I felt like I was drowning and thought: how could I possibly continue in a field when I couldn’t even grasp the basics? I was ready to quit before I even had a chance to start my career in astronomy, but I saw an ad for a program called AstroCom NYC—an undergraduate astronomy research program specifically aimed for underrepresented minorities based at the American Museum of Natural History—and decided to give it a try. A few weeks later, I got an email saying I made it to the next round, and they wanted to meet for an interview at the museum! Although I had lived in New York all my life, I had never been to the American Museum of Natural History—so at least if I didn’t get in this program, I got to see some cool dinosaurs.

The interview process was my first time interacting with white folks on a professional level. I knew it wasn’t their intention to make me feel hyper-perceived, but it was difficult to feel otherwise—especially when you are the only person of color in the room. I felt like I was on a show, and my future in astronomy was in their hands. I thought the interview went terribly, but to my surprise, I received an acceptance letter before Thanksgiving break.

My experience in AstroCom—a minority-retention program predominantly run by white people who are from a place of privilege—was mixed. I don’t want to go into the details of my time in AstroCom because some of those memories were hurtful. However, not all of it was dark and gloomy; my happiest time in undergraduate was with these people that I know are trying to make the field a better place. I will say AstroCom has gotten tremendously better since I left, thanks to the previous and current students who are fighting hard to be treated with the respect and dignity they deserve.

I knew I had to work ten times harder than anyone else applying that year. I concluded two projects that led to publication, wrote an NSF GRFP application to work with them, and then hounded Prof. Chomiuk down when she was visiting Columbia University so I could network with her. I did all this all while balancing a full-workload of classes and waitressing. My persistence paid off because I was waitlisted and then finally accepted in April. I remember that day clearly; I ran down to the museum’s fifth floor to tell my friend JP I got accepted. We went to celebrate and I could not stop smiling the whole night.

When I finally moved to Michigan that Fall—it was a culture shock. My undergraduate physics program was small but uniquely dominated by people of color, and it had a mostly equal distribution of gender. Michigan State’s physics and astronomy department is the complete opposite. In my first two years of graduate school, the astro group only had two people of color including myself, and we leaned on each other for encouragement as we carried the frustrating burden of being a learned experience for white people. This was an incredibly isolating experience.

Last Words of a Shooting Star

When I was asked to write a piece for AAPI Heritage Month, I had some initial hesitation about what I wanted to say as a Thai woman in astrophysics. There’s so few of us in this field, and I do not want to be mischaracterized, nor do I want other Thai women to be negatively impacted by this article.

I have never had a problem with my Thai identity, nor have I ever been ashamed of my heritage, but many people do not perceive me as being Asian, because I am not East Asian. Because of this, I have been privy to people in our field saying pointed, racist things about Asian people right to my face who expected me to join in. Once people knew of my identity, I was often on the receiving end of jokes because of my ethnicity. I was once told by a professor I was not considered a minority because Asians are overrepresented—yet they couldn’t name one other astronomer that came from my background. Looking back at my past experiences, I wish young Teresa knew that she deserved a place in astronomy.

If it weren’t for the support systems at my undergraduate institution and Michigan State, especially the support from my PhD supervisors, I would have surely been pushed out of the field due to institutional negligence.

I do not have the answers to all the problems in our field, but I do know we need to have better support structures for students of color—especially those that are from underrepresented Asian identities (Hmong, Lao, etc.). We are all too often “weeded out” because institutions lack the proper resources to support our financial, emotional, or academic needs. We have an ethical duty to support these scientists, and it’s time we actually do something to make positive, concrete changes.