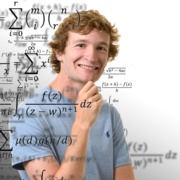 Thomas Grubb is a senior majoring in mathematics and economics from Haslett, Mich., and a College of Natural Science Dean’s Research Scholar .

Every year the Mathematical Association of America hosts the Putnam Competition, a notoriously difficult mathematics test for undergraduate students. Several thousand students sign up to take the test each year, and the median score has often been as low as zero points out of a possible 120.

As a result of the difficulty of the test, winning the competition is a big deal. The names of each year’s Putnam winners are published nationally, and many winners go on to be leading researchers in the field. Because of the regard that the mathematical community places on this exam, many schools have started training sessions for the test.

It was at Michigan State’s Putnam sessions that I first experienced the test firsthand, and it was at these sessions where I first started to fall in love with math.  During the first semester of my freshman year, my calculus professor was also running the Putnam training course, and had invited our class to come see what the test was all about. I was a bit unsure of how a math test could really be that challenging, and decided to go to the first meeting to see if the exam could live up to its reputation.

At the first meeting we learned about mathematical induction, a fundamental tool used in higher mathematics. It was a new concept for me, but it seemed natural enough. How hard could this be? I opened up the packet of problems and began working. One problem done. Then another. The problems were difficult, sure, but they were far from what I expected from the hardest test in the country! And then I looked down to the end of the packet. There I found a categorization of the problems by difficulty: I had been struggling with the problems in the “trivial” section.

I then turned to a question in the hard category. I worked on that one question for the remainder of the problem session with no luck. I took it home and spent hours staring at it, and still, no luck. I finally started to realize the true nature of the exam; a week later, after spending days working fruitlessly on the problem, I asked the instructor for the solution. I was amazed at the insight and ingenuity that went into the answer. It wasn’t computational at all, like the math that I had seen in high school. The proof really was more of an art form than an algorithm.

Taking part in the Putnam training session is how I first learned what higher level math is really like. It is logic, creativity and persistence, all meshed into one pursuit. Studying for the Putnam test led me to find one of my greatest passions at MSU. While I have never been close to having my name published nationally for my performance on the Putnam, I have been able to find a field that I thoroughly enjoy learning more about every day, and I am very grateful for that opportunity.