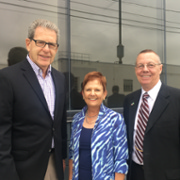 After Krigas had completed his undergraduate degree in chemistry at the University of Illinois in 1960, his advisor at Illinois recommended he apply to MSU because of its well-respected chemistry program.

Krigas was already familiar with Michigan because of a summer job he’d previously held with the Brach Candy Company during the summers of 1958 and 1960. His job was bleaching the cherries in a brine solution and then adding pectin to firm up the fruit before sending them back to the candy plant in Chicago.

“When I came to MSU, I hadn’t known about Rosenberg and his work; he was a fairly new professor, and biophysics was a very new field,” Krigas said.

It wasn’t until 1964 that he got involved with the cisplatin work, along with Rosenberg’s colleague Loretta VanCamp. Rosenberg and VanCamp had been studying the effects of an electromagnetic field on the growth of E. coli and they were getting some unusual results. The E. coli were growing into long filaments in which the cells were not separating.

“The platinum electrodes were supposed to be inert, but Dr. Rosenberg thought we ought to rule out that the filamentous forms were caused by a chemical effect. That’s how I got involved,” Krigas said. “I was able to determine that the platinum was oxidizing and dissolving into the solution and interacting with the E. coli to cause the filaments.”

The “aha” moment came one weekend when VanCamp inadvertently left the stock solution of dimmonium hexachloro Pt (IV) on the lab bench, instead of placing it back into the dark of the cabinet. The sunlight altered the platinum structure from a bactericide into a filament-producing version.

“Dr. Rosenberg and Loretta VanCamp were both very excited because they felt whatever was in that solution, it had a real potential to attack cancer because cell separation was inhibited,” Krigas said. “I felt that they were extrapolating too far. But, of course, they were right!”

Following the extensive and successful experiments on tumors in mice with subsequent treatment by cisplatin, a patent was applied for.

“As we signed the application, I recall that we sat in Dr. Rosenberg’s office and speculated that whatever money came in from the patent, we would just put right back into cancer research,” Krigas said. “Clearly, we had no idea how much money would be generated. Ten years later, we went from being donors to entrepreneurs.”

Krigas worked in the Rosenberg lab until fall of 1965, when he left to work on his Ph.D. in physical chemistry.

After completing his M.S. in 1964 and his Ph.D. in 1971 at MSU, Krigas worked for three years as a research scientist for Amoco Chemicals (now British Petroleum), first in Indiana and then Illinois. He then worked doing research and development for Chemplex, a company located in Rolling Meadows, Illinois, that produced polyethylene and polypropylene. Krigas retired in 1995, but continued to work for a division of that company as a consultant until 2000.

“We were blessed to have been a part of this cisplatin discovery that has helped many cancer patients,” Krigas added. “As improbable as it might seem with a physicist, a microbiologist, a chemist and some serendipity, this work shows the power of collaboration.”

NOTE: In the photo, Tom Krigas is the person on the left.